STOCKHOLM – On Wednesday, new members and sector commitments announced at the Industry Transition Dialogue signaled growing momentum for industry decarbonization. The high-level meeting was co-organized by the Leadership Group for Industry Transition, LeadIT, and the World Economic Forum in connection to Stockholm+50. A series of announcements were made Wednesday:

Matt Rogers, CEO of the Mission Possible Partnership, gave a keynote speech detailing the extent of change required for seven heavy industries, which now contribute to roughly 30 percent of global CO2 emissions must change. As an example of the pace of change needed, he noted that there is one net-zero steel facility in the world now, but 100 will be needed within the next eight years. “One to one hundred is the pace of change needed in the marketplace,” he said.

Anthony Hobley, Industry Transition Champion & Executive Fellow at World Economic Forum, said, “If we are to achieve these numbers, Covid has shown us and Ukraine has shown us that we can move quickly, but we need a crisis mindset. Move from isolated examples, from hobby-level public-private partnerships to what Ford did for industrial manufacturing.” At the event, speakers representing participating countries, companies, and organizations repeated the call for financing to help new technologies transition from plans to widespread use in a just and equitable way – and as quickly as possible. Very large incentives were essential in spurring the adoption of green technologies that are now in widespread use – including solar electricity and electric vehicles, noted Rebecca Dell, Industry Program Director at the ClimateWorks Foundation.

Suggestions to speed the pace of the transition, and to expand the ranks of the global coalition moving it forward, included setting an international carbon price; expanding efforts to build expertise and capacity, particularly in developing countries; and helping to “de-risk” promising and existing innovations.

There was a universal call for greater international cooperation and wider participation if the world is to meet its goal of containing climate rise to the 1.5-degree target. Annika Strandhäll, Minister for Environment and Climate for Sweden, said, “The growing momentum for industry transition is dependent on political leadership that will enable green technologies to reach commercial scale within this decade so that all countries can address the climate crisis in a way that creates jobs and build lasting economic growth.”

She said that with a combination of political and industrial leadership, “…we can change mindsets, and we can drive global change.” A key, she said, is to demonstrate that there is a business case for moving forward. “The winners will be those in a hurry to speed up the transition – not those who cling to fossil fuels.”

Bhupender Yadav, India’s Minister of Environment, Forest and Climate Change, said “Viable markets and economic models for decarbonized industrial production will be the tipping point for reaching Net Zero everywhere.” Emerging and developing economies must move quickly to make a transition so that “the markets for these decarbonized products have sufficient volume to create value chains of the sort that the First Movers Coalition is pioneering,” he said.

Selwin Hart,  to the UN Secretary-General on Climate Action and Just Transition, said that the pace and scale of change need to pick up and that the coalition needs to grow – particularly with more companies from developing countries. He urged those in attendance to act. “We need you to be influencers of change in your countries,” he said. “We need to be champions of credibility…Your contribution will make a decisive difference in getting us on that critical pathway.”

Rt Hon Alok Sharma MP, President of 26th United Nations Climate Change Conference, said that achieving climate goals depends on making clean and green solutions affordable and available. “Friends, the only way we get there is by all of us working together in collaboration,” he said.

Jenitha Badul, Ministry of Forestry, Fisheries and the Environment, South Africa, emphasized that to unlock necessary investments in the transition, the process “has to be inclusive as we move from brownfield to greenfield.”

Kenichi Hosoda, State Minister of Economy, Trade, and Industry, Japan, called for more effective trade rules to accelerate action. “Japan is eager to work with all of you to reform the industrial structure and …all of society,” he said.

Dr Rania Al Mashat, Minister of International Cooperation, Egypt, said finance is very important to push scale in developing countries. “There is a very important role for financial institutions to play here,” she said. “Concessional finance can in many instances provide a catalyst to crowd in more private investments.” She also emphasized the need for multi-lateral institutions to invest in needed expertise and capacity building.

Martin Lindqvist, CEO of SSAB – which is part of the Hybrit consortium that will deliver fossil-free steel at a commercial scale by 2026 – emphasized the importance of public-private roadmaps and political leadership to accelerate momentum. SSAB’s success factors thus far have been built on the efforts the company made to evaluate its value chain, he said. Still, barriers must be addressed, he said. “A major challenge for us is to have fossil-free electricity at the right place at the right time.”

Andreas Foller, Head of Sustainability for Scania, said he was frustrated by the lack of pace, and he called for better regulations, more charging infrastructure, de-risking of investment, and greater efforts to partner for change. “From now on, everything is about adoption,” he said.

Mafalda Duarte, CEO of the Climate Investment Funds, stressed the importance of policies and regulatory reform and the need to address resilience issues. “It is really important that (resilience) is a dimension taken into account,” she said.

Steven Fisher, President and CEO of Novelis said collaboration and commitment are vital. “The ‘together’ is really, really important up and down the value chain.”

Ron Lewis, COO of Ball Corporation said a goal for the industry is to reuse and recycle to a far greater degree. “We invite everyone” he said. “Partnership is the new leadership.” 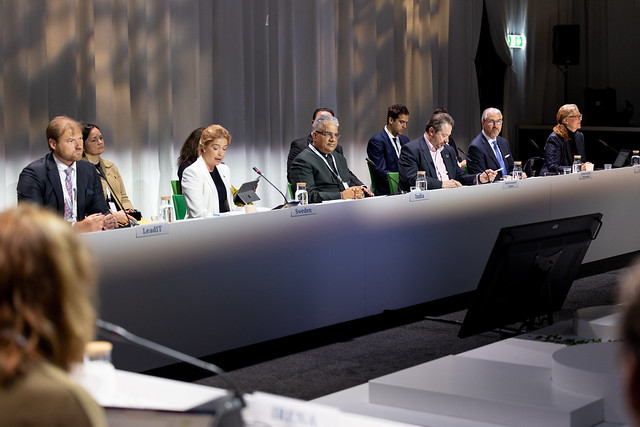 In a consultation organised by the Climate Investment Fund (CIF) and LeadIT, LeadIT members had the opportunity to provide feedback on CIF’s recently launched Industry Decarbonization Programme, intended to mobilize over $60 billion to support industry transition in developing countries.

Per has joined LeadIT at an impactful moment, with Members chairing the G20, G7 and the EU, and LeadIT building on its successes to continue to deliver on our net zero mission.

Watch the Launch of LeadIT Summit Statement at COP27

The Summit Statement was launched with special remarks by Minister, Shri. Bhupender Yadav India, and Minister Romina Pourmokhtari, Sweden. A panel with key stakeholders including the US, South Africa, Dalmia Cement, SSAB, the Climate Investment Fund, and UNIDO discussed how to catalyze action for industry transition in 2023.

LeadIT Summit: “Time is up for waiting for each other, we need to move together!”

At the Summit at COP27 in Egypt, LeadIT and its members agreed to promote value chain partnerships and material circularity, deliver on infrastructure pledges, and support industry transition in developing countries.

The statement highlights 2030 as a critical milestone on the path to net-zero emissions. It notes that LeadIT members will promote partnerships along value chains to strengthen the business case for low-carbon products and their supply.